Can You See the End?

October is  Domestic Violence Awareness Month and I’ve been doing a lot of speaking to community groups this week. Yesterday as I was speaking to a group I suddenly had a profound realization; let me take you back to how it came about. 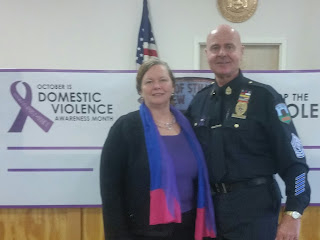 Annually Sergeant Cordani organizes a press conference to recognize the program and to raise awareness of the need. Yesterday I had the pleasure of listening to a number of community leaders passionately articulate their profound commitment to this issue:
Senator Kathy Marchione who committed to championing policies and funding protect victims and provide support services.
Assemblywoman Carrie Woerner who supports women’s issues, especially educational opportunities that promote gender equality in education and employment
Assemblyman Jim Tedisco who is a voice  for laws to  protect our most vulnerable family members- our pets. He understands too well the intersection of animal abuse and domestic violence, and Congressman
Paul Tonko who rallies for  employment issues affecting women, “Congress must step up to the plate and support our mothers, sisters, and daughters.”
Sergeant Cordani noted the Stillwater Police department responds to at least one, but sometimes two or more, domestic incidents every night,  “Unfortunately, domestic violence incidents are not going down.” A glance toward Sheriff Mike Zurlo confirmed that this is true throughout the county.
District  Attorney  Karen Heggen has two attorneys dedicated full time to prosecuting so domestic violence crimes… yes it’s that prevalent.
Such inspiring speakers. What a depth of knowledge, compassion and dedication!
And so it was then my turn to speak.  Walking  up to the podium  I truthfully wasn’t sure  what I was going to say. It’s not easy following a lineup like that.What more can you say?
Well I looked at Sergeant Cordani,we met back in 2003 when we first did this cell phone collection, and wondered aloud, “How many times has he responded to a domestic incident?” Then at Sheriff Zurlo who has been a law enforcement officer for more than 30 years; how many victims has he assisted? And District Attorney Heggen, how many domestic violence crimes has her office prosecuted?.Wellspring’s hotline alone answers 1,400 calls each year… and we’ve been doing this work for more than 35 years. Looking at my colleagues who do this work every day, I commented it would be understandable if we were tired, frustrated or disheartened seeing so many victims year after year. But not one of us showed any signs of resignation. In fact, strength and determination shone in our eyes. And standing at that podium I had a realization. Since I joined Wellspring 14 years ago, I’ve always had a vision that our agency could do more than help survivors… we could end domestic violence. For quite a while people questioned if that was a realistic goal. Actually that’s now Wellspring’s mission statement. Standing there I realized I truly feel that I’m not the  only one who sees that as our goal …and we’re nearing that finish line. It’s no longer police offers, prosecutors and advocates that are doing this work. People throughout our community are joining us in that vision. Whether we’re watching a football game, visiting a college campus, donating to a workplace cell phone collection, or eating dinner with your kids, we’re all noticing, and talking about domestic violence. It’s moving out of the shadows and we’re all becoming part of a social change. So like Pandora’s Box, when hope is released good prevails. Together we can end domestic violence.
Feeling inspired? Here’s something you can do right now to help:
Help Wellspring win  $20,000 on October 25th
Wellspring, is close to winning $20,000 in the Purple Purse Challenge! Can you help them reach this milestone and support their clients and our community?  It takes just seconds.
Donate here
Want to do more? Share the link with your friends and ask them  to be part of our vision of ending domestic violence.

Curious about Wellspring’s standing in the Challenge?
View the leaderboard here