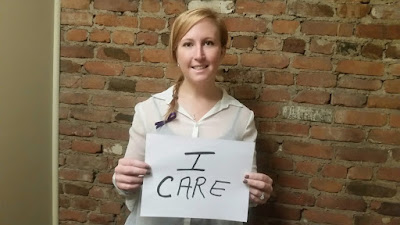 Do you care about domestic violence?
Few people would say, “No I don’t care.” or even “I don’t have any opinion about it.”  Some might say, “I don’t know anyone who has experienced domestic violence.” Surprisingly, time and time again people have told me that once they started talking about the issue, they were surprised how many people they knew who had experienced relationship abuse.
I’ve recently come across an awareness campaign in Vermont, #Icare, where people post their reasons why they care about domestic and sexual violence.

Our reasons for caring can be so very different. They may be intensely personal, other times professional, e.g. police officers who see these situations daily, and sometimes more global concerns for social justice or gender based equality.

Domestic violence thrives in silence and darkness. Victims or survivors of abuse, often aren’t able to speak out about how the abuse affected them. Perhaps speaking out could be dangerous. Perhaps speaking out about what an abuser did to them could harm their children if that abuser also was called Daddy or Mommy. Solving  domestic violence isn’t the responsibility of those who have experienced abuse; it rests with all of us.  Together we can end domestic violence, but first we need to know why this is so important. Do you care? If so, speak out. Visit the “I Care” post on Wellspring’s facebook page. It takes just a few seconds to break the silence. Say “I care.”