I often think about causes and wish I had the time to assist. In fact, it’s often easier to help out than I imagine. For Domestic Violence Awareness Month, many community partners are helping us to promote awareness in simple but effective ways. For example law enforcement agencies, including the Saratoga Springs Police Department, NYS Police, Saratoga County Sheriff, and Stillwater Police Department are promoting awareness by placing domestic violence awareness car magnets on their vehicles.
They’ve been doing it for several years now. When they first partnered with us, I was surprised by how many community members were impressed when they saw the ribbons on the police cars. 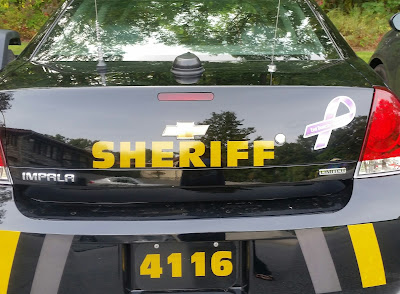 I heard from many clients of Wellspring that just by seeing the awareness ribbons on police cars they felt more reassured that if they called the police these officers would understand and help them. Wow. It takes just a few seconds to put a ribbon on a car, but that small gesture speaks volumes about their commitment and professionalism.