If Barbie was the Girl Next Door 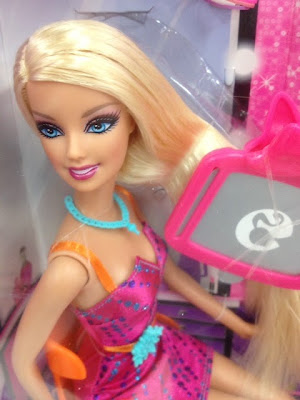 As a kid I wasn’t into dolls and later I had two sons, so I’m clearly not the expert on Barbie or how this  11 ½ inch doll influences girls’ body image and sense of what’s important. But I’ve heard enough mothers talking about their 3, 5, 7 and 8 year old daughters’ fascination with being just like Barbie, using lipstick, having pretty clothes and lots of stuff, that I do wonder if Barbie and all the other gender-specific modeling we provide our daughters with gives mixed messages when contrasted with parents’ encouragement to study hard because you can be anything.

Sure Barbie has gotten more serious. Her accessories now include business suits, briefcases, a stethoscope and other accoutrements of a professional life. But, even for an adult,  it’s hard to look past the cascading blonde hair, sparkling blue eyes , and flawless cheekbones. And let’s not even mention the teeny waist, dainty feet and generous bust. After a day trying cases, Trial Lawyer Barbie would probably have a walloping backache (assuming she could actually stand upright to begin with.)
Is Barbie at the root of gender discrimination, girls’ eating disorders, or excessive materialism… probably not.  But is Barbie an early introduction to an unrealistic version of beauty and feminine appeal for many young girls… probably.

Nicolay Lamm has reimagined Barbie using what the CDC tells us is a typical 19 year olds’ body.  He’s proposing that Barbie gets a new look, based on normal body measurements. She’s still blonde with sparkling blue eyes, but this version looks less like a Vegas showgirl and more like the girl next door.  You can imagine her as a cheerleader, but also as the school’s soccer star, classical pianist, math whiz, valedictorian… or just the nice girl who sits in the next row in class.  And those sturdier ankles and feet will come in handy in a few years when she’s pleading a case to the jury.
Will changing Barbie’s look end eating disorders, materialism, sexual  victimization or help women break the glass ceiling… no… but maybe it’s a place to start.