There are Only Two Ways to Live 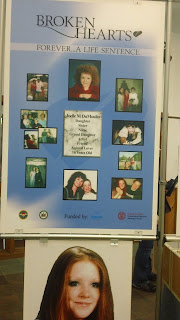 At today’s Crime Victims’ Vigil two articulate young women, both survivors of crimes, spoke eloquently about  how the actions of one person have forever changed their lives. One woman’s life  was changed in a millisecond as she was struck by a drunk driver as she stepped out of her car at a gas station. The other endured almost a decade of victimization, as a relative exploited her trust and innocence as he sexually abused her from the time she was four years old until she became a teenager.

As the candles were lit, vigil attendees spoke the names of loved ones whose lives were taken from them far too soon. A child whose life ended after just a few years… because someone drove drunk. A daughter killed by a boyfriend, leaving behind children who would never know their mother. And on…Each year a scroll with crime victims names is displayed at the vigil… there are now 456 names on the scroll. At the vigil it’s impossible to think of crime as just statistics. Numerous display boards show photos of love ones lost, but never forgotten.

Despite personal grief, many attendees also offered prayers for families in Newtown, Connecticut and victims of the Boston bombings, where tragedy struck so many at once.  John Kelly,  whom District Attorney Jim Murphy recognized at the vigil for a lifetime of work helping crime victims, offered words to reflect on as we recover from such mass violence, “There are only two ways to live your life… just two. One is in fear; the other is with hope.”