In the Public Interest 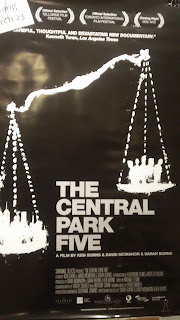 Saturday night I attended the Saratoga Film Forum’s showing of the Ken Burns’ documentary, The Central Park Five. The film chronicaled the conviction (overturned years later when the real assailant confessed) of 5 teenagers who were accused of brutally raping a young, white professional woman who was jogging in Central Park. The movie’s primary premise was the racial injustice underlying the public outrage and pressure on police to close the case— the 5 teens were black or Latino. The film illustrates how what they describe as forced confessions resulted in convictions and incarceration that robbed them of their teenaged years…even though the evidence in the case was contradictory and did not support their testimony.

Aftet the movie Dale Wilman of Saratoga Wire facilitated a panel discussion featuring Rochelle Calhoun, Skidmore’s Dean of Students, and Assistant Chief Greg Veitch of the Saratoga Springs PD. While the crime chronicled in the documentary occurred more than 2 decades ago, Calhoun ‘s observations about our criminal justice system’s  response to people of color still holds true’s today. Veitch provided some insights on how media coverage and the public’s desire to have the details of the crime and investigation can influence police investigation.

The Film Forum’s In the Public Interest series offer us a unique opportunity to discuss key social issues with professionals who can provide enlightening insights. The interplay of cinema and discussion group provides an unforgettable impact.We’re lucky to have such an opportunity…thanks Film Forum!