Certain symbols have been instrumental in raising awareness about social issues. Think of the red ribbon for  awareness of HIV/AIDs, pink ribbons for breast cancer, yellow ribbons for returning military personnel, red dresses for women’s heart disease, puzzles for autism awareness.
We’re running out of colors in the rainbow for awareness ribbons. Those of you who know me , know that purple has long been the color associated with domestic violence, but that’s getting confusing. According to Wikipedia, purple awareness ribbons represent 26 different social issues ranging from Alzheimer’s Disease  and Suicide Prevention to Pagan Pride and Protecting Orcas .
Don’t get me wrong, these symbols are important. When I crack open eggs in October and see a pink ribbon on them, I think about breast cancer and the women I know who have been affected… and I remember how important it is to fund research and support services. But if you’re not sure what social issue the symbol refers to, that’s a problem. Purple seems to be a popular color;  it had more causes associated with it than any other ribbon color. 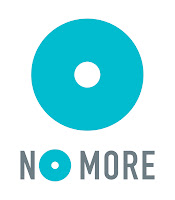 So here’s a new symbol associated with domestic violence and sexual abuse. It’s being launched today. And even more important it’s about getting the incidence of domestic violence and sexual assault down to ZERO…  now that’s a symbol with impact.
So have you seen the NO MORE symbol yet? What are your thoughts?
Related posts:
Join Me in Saying NO MORE  March 5, 2013
NO MORE Working Together to Get to Zero  March 4, 2013