From Different Nations, but United as Women

Friday was International Women’s Day, but the spirit continued Saturday at Skidmore. I had the honor of participating in a roundtable discussion with 25 women in leadership roles, 17 from South American countries and 8 local women leaders. 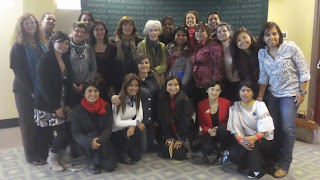 Early in our discussions, I was stuck by the differences in their cultures and ours. Some women described their homeland as a place where girls’ education often ended at elementary school. This aborted schooling was an impediment to equality; without education women lack a voice in government, are less able to become business owners, and have limited economic independence. She spoke about efforts to teach business skills so these women could prosper despite a lack of formal education.
Yet at that table were 17 highly educated and articulate women, attorneys, businesswomen, elected officials and high ranking public servants. It was clear that each woman had struggled against social norms to achieve her post… and each was very conscious that she was a role model and a voice for other women. I was honored to sit among such inspiring leaders.
As our conversation continued, our differences dissolved and the similarities in the issues that concern us brought us to a common ground that gave depth to our exchanges: access to health care, bullying, discrimination against minorities.  When the conversation turned to issues of domestic violence, the issues raised were the very ones I discuss every day. Unquestionably, resources in the US are more plentiful — one woman stated her country had only one domestic violence shelter in the capital city, although law stipulates states are required to have shelter. But the underlying issues were the same: economic dependence, access to employment and pay equity as obstacles to leaving abuse, concerns for child welfare, and the desire for social change… not only to benefit women, but to benefit families and the country as a whole. When there is justice… all citizens benefit.