To the god of doorways… and noticing the silence

The Roman god Janus was the god of doorways, transitions, and new beginnings. It’s fitting that the our first month was named in his honor, because we spend those first days of the new year contemplating where we’ve been, where we’d like to be and sometimes making resolutions to help us achieve those goals.

Looking back at 2016, I’m struck by how much the issues of sexual harassment, domestic violence, and sexual assault have dominated coverage of news, sports, Hollywood, politics, even the tech world. These conversations aren’t totally new; 2014 seems so long ago when Ray Rice’s infamous act of domestic violence was captured on video, doesn’t it? Yet, the cadence and depth of covering these stories seemed to increase significantly in 2017, culminating with the #MeToo campaign that went viral with thousands of women disclosing their own stories of sexual harassment or sexual victimization. 2017 was a year of reducing the silence and stigma of sexual victimization, and recognizing the strength of survivors who are willing to tell these very personal and traumatic stories to help us understand the magnitude of the problem, so we can create change. 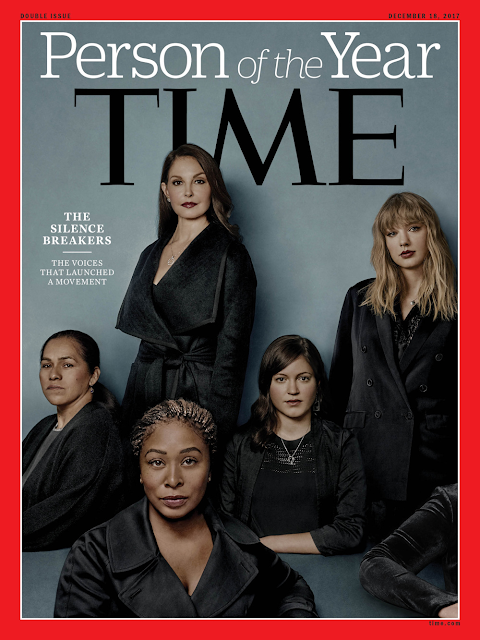 In fact, Time’s person of the year is a group of women whose courage in discussing their own experiences of victimization, opened the floodgates on twitter as other women told their stories. MeToo isn’t new; Tarana Burke created the MeToo campaign back in 2007. What’s different is the willingness to tell these accounts, to listen nonjudgmentally, and to accept that we all are a part of the problem when we don’t notice, speak up, or intervene. So Time is heralding the courage of those voices create change… but look closely at the bottom right corner of the magazine cover.  Did you notice the elbow? Melissa Chan of Time explains,
“It belongs to an anonymous young hospital worker from Texas — a sexual harassment victim who fears that disclosing her identity would negatively impact her family.
She is faceless on the cover and remains nameless inside TIME’s red borders, but her appearance is an act of solidarity, representing all those who are not yet able to come forward and reveal their identities.”
And that’s the doorway we are all standing in. We’ve brought the issue of gender based violence into our consciousness…  many survivors still are haunted by their victimization… but the fear that constrains them today is what would happen if they gave voice to their stories of victimization. Those who nod knowingly, but who don’t tell their own stories outnumber the many who have said #MeToo. May 2018 bring us out of the doorway to a place where They Too can feel safe.
If you or someone you know
has experienced relationship or sexual abuse,
or if you or someone you know is struggling because of the media coverage of sexual violence, talking to an advocate can help.
Call Wellspring’s hotline at 518.587.8188